Thoughts on Symbolic Action: Part One 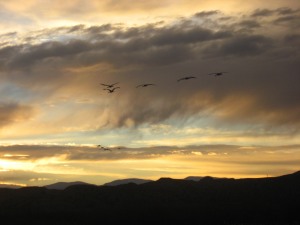 “WOULD ANY SANE PERSON think dumpster diving would have stopped Hitler, or that composting would have ended slavery or brought about the eight-hour workday, or that chopping wood and carrying water would have gotten people out of Tsarist prisons, or that dancing naked around a fire would have helped put in place the Voting Rights Act of 1957 or the Civil Rights Act of 1964? Then why now, with all the world at stake, do so many people retreat into these entirely personal “solutions”?”

So begins Derrick Jensen’s provocative article on personal versus political action in a recent issue of Orion Magazine.

Maybe Jensen’s call to large-scale action is actually filled with subliminal messages that inspire personal change, because since I read it and began a mental argument with it I’ve taken the plunge into actively reducing my footprint. Have I ever for a minute thought that my efforts, so enormous to me yet impossibly miniscule to the planet, would actually make a difference beyond the walls of my home? Not really. But the funny thing is, they do.

Our decision might be symbolic in that it is a mere drop in the churning ocean of politics, economics, and social inequalities that contribute to the systematic destruction of the planet. But like the oak groves that can’t be blown over because of their intertwined roots, our small action is strong because it is linked to all the actions that came before, and all that will come after. It has its origins in the work of the thousands of individuals – be they peacemakers, defenders of nature, fighters for social justice, or parents and teachers – whose convictions changed their own lives and grew outward from there.

No matter how insignificant I might feel some days, I am not alone. You’re here with me, too, after all. And countless others, across the planet and stretching back into history, when so many other great struggles were triumphed over. I agree wholeheartedly that we all need to do much, much more than we are. For me, though, the challenge isn’t to transform “the system” but our smallness in the face of it. Despair and isolation are what we really need to rise up against. Hope and imagination, and faith in their power to overcome the most powerful odds, those are the seeds of symbolic action. Once that seed begins growing in our hearts we are well on the way to changing our lives, and the world we inhabit.

What we then feel led to do, in our communities and beyond, well, we can take that path when our feet reach it. For now I’m like so many others, just walking. I’ve left the land of my complacency, and set out with no other aim but to find the way to my own truth, and maybe even a better world. And from there, who knows. Total system overhaul, we can hope.

So, Mr. Jensen. Good points but here’s your major mistake (to paraphrase Margaret Mead): Doubting that a small group of ass-kickers can change the world. Haven’t you heard that that’s the only thing that ever has?

And how dare you underestimate the power of composting.

5 Replies to “The Personal is Political”