I’m thinking that whoever decided sliced bread was so great must have sold plastic bags. After all, why else praise an innovation that requires something as basic as bread to be kept in one? A much better thing to celebrate the greatness of, I’ve decided, is the tortilla press.

No, you don’t really need one. My friend makes corn tortillas by pressing them with a pyrex pie pan. But oh, are they heavenly. I’m quite taken with this one that my folks brought me from Mexico. I could have bought one down the road at the Mexican grocery, but am a bit wrapped up in my buy nothing new philosophy, which happily doesn’t exclude gifts. 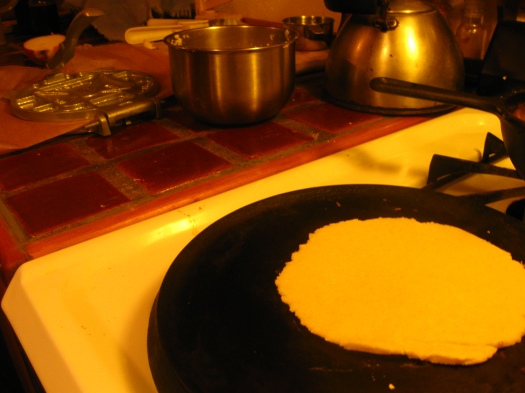 It’s like magic, this amazing little maquina. Mix dough easy peasy, press the handle, put on the skillet, eat a bit of heaven. I used to think making corn tortillas was a chore. We eat a lot of bean and rice feasts around here, and the taco portion has been conspicuously absent for a while. No longer. Now I’ll make a few tortillas at lunchtime (without complaining!) and even in the morning when making E’s lunch. I will say that when I tried to make wheat tortillas with the press it didn’t work too well, and that I was a bit relieved that I still have good reason to wield my rolling pin regularly. Also, I should mention that tortilla presses come with a piece of plastic sheeting to press the dough between, so that it doesn’t stick to the press. At first I was opposed to using it, and used parchment paper instead. That worked fine, but isn’t as reusable or durable as the plastic, so I’m surrendering to the wisdom of countless Grandmother’s south of the border and just loving it instead of fighting it.

So I ask you, what’s your favorite device that brings a bit of ease and perfection to an otherwise handmade endeavor? This week, see if you can’t slip into casual conversation something like, “Oh wow, that’s the best thing since____(the food mill, apple slicer, etc) was invented.”

4 Replies to “The Best Thing Since…”