For every plume of smoke rising like a storm form the mountains, for every beloved place we witness in flames and for every burned place we have never walked, nor seen, nor imagined.

For the memory of monsoons and green sagebrush mesas, of hollyhocks bursting from the sidewalks, of the smell of sweetness in the air. 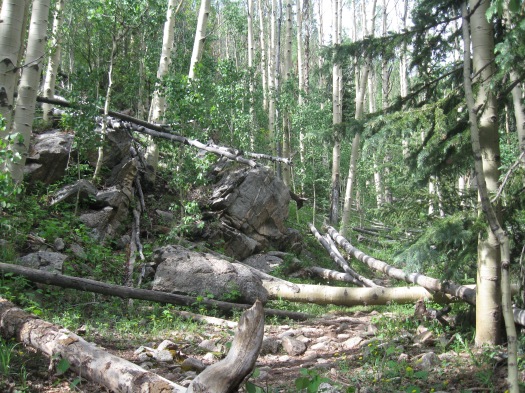 For the green forest. Have I sung often enough of the powdery white beauty of aspen skin? Of the fireweed blossoms spiking into bloom? Of the light that shines through the canopy, against rock walls, shimmers in the brief laugh that is the stream? What of the deer and her child drinking in that same place at dusk, with those eyes, that grace? What of all that is unseen, unknown? 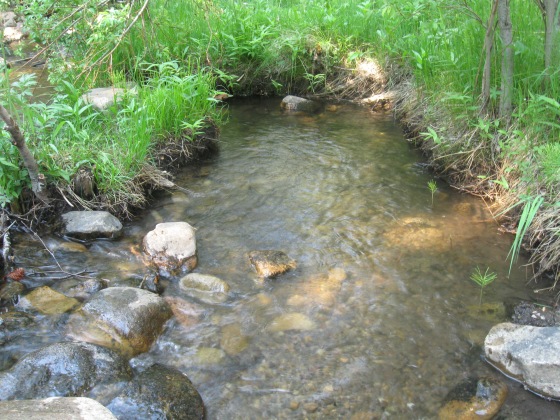 For the dry acequias that once irrigated our valleys, and the fields they watered, the lives they sustained, the past they connected us to. For the gardens unplanted and the rivers that are dry, but should not be.

For an entire culture, a tapestry of lives and histories, stories, beliefs, and dreams that are sustained by this place. For all the love that is rooted in this land, the lives that have been shaped by it.

For all we are losing, and fear losing.

In his beautiful interview in The Sun this month, John Elder says that because of climate change we are “at the point of active relinquishment…of things we don’t know whether we can do without.” It is strange to grieve in June, but it must be done, my friends. What else is there for when the plume of smoke pops back up, when the old trees on your street are dying, when you begin to realize it’s not one bad year, but the beginning of the future. 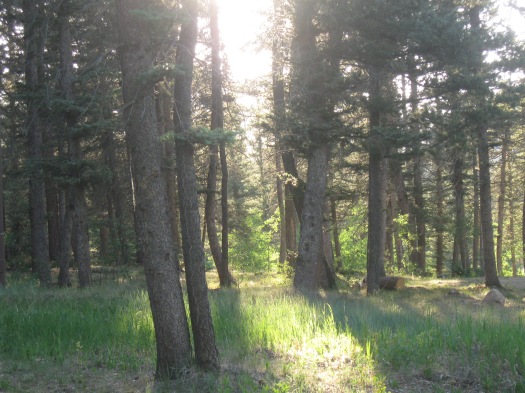 A recently published report claims that in fifty years New Mexico’s conifers will be gone, and with them life as we know it. Maybe, maybe not. But I do know the forest closes on Monday, and that is enough to grieve for now. By the time it reopens, I’m pretty sure web worms will have eaten every green aspen leaf, no more to twist and tinkle in the breeze.

So, an elegy for this glory we are graced with, have walked amongst for these many good years, for this beauty we have been shaped by. And will never stop singing praises to in our thousand different ways.

Speaking of praises, I have a little story to tell about the tiny but mighty town of Mora, New Mexico. Poor as dirt, dryer than hell, and nowhere near as liberal as most Northern New Mexico towns, Mora recently became the first county in the country to ban fracking.

We drove through there last week on a camping trip, and I choked up at the sight of each and every ordinary person walking down the street. At the little grocery store, it was all I could do to not tell the teenage girl ringing up my groceries how grateful I am, how proud I am of her town.

“Thank you,” I said from the heart when she handed me my plastic sack with chocolate milk and four plums in it. But I didn’t say, “Thank you for being a part of the story of how the world could be saved by people saving themselves. Thank you for reminding me that in a day in which it seems nothing is getting better and ever more obscenely and horrifically worse, we are not lost. You have shown the world beauty and reason and hope, and for that I thank you.” Maybe I’ll write a letter to the town, instead.

While we were passing through a neighboring village, we stopped at a backyard junkyard my husband has been monitoring for almost twenty years. Under a tarp, in between a Datsun Honeybee and a Toyota Tercel, sits a rusty old 1965 VW 21-Window Deluxe. It’s kind of like the holy grail for Volks like my husband. Mr. Old Recipe visits every five years or so to see if the owner might be persuaded to let us tow it home. Last week he knocked on the door and tried again.

As usual, the answer was no.

“I’m gonna be buried in that bus,” the old guy, bearlike with a long pony tail and beard, said. Standing in the rotting doorway of his dilapidated home, surveying the junked cars and detritus of his yard, the man added, “A while back a couple came up from Santa Fe and offered me $25,000. I told them I don’t need money. I love that bus.”

And so it sits, and will someday be returned to the earth.

On our way out of town I commented that the attitude of the old guy who won’t sell what he loves was likely the attitude that saved the town from frackers. Money? What do we need money for? This is the land our families have lived on for two hundred years! We don’t need your money, we need our water.

9 Replies to “An Elegy for June”