For all my fretting over falling of the wagon, looking over this month’s new plastic trash was rather reassuring. (By new plastic I mean things we acquired and disposed of since January.) An exercise in the pleasures of archeology. Sort of. 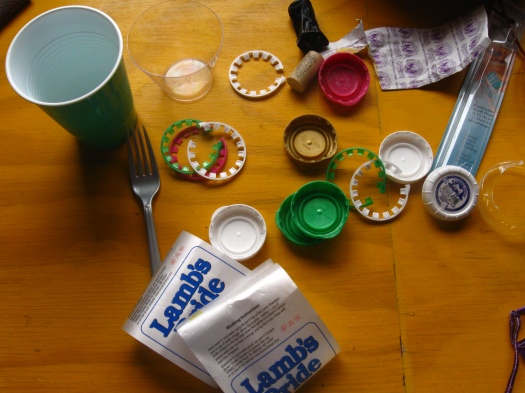 ~ Last month E. and I attended our first party alone together in a long, long time. He drank beer from the keg in that green cup, and I took my wine in the little clear one. The fork was for our friend’s birthday cake, and we shared it.

~Two out of a total of four Lamb’s Pride yarn labels. They actually say they are recyclable, but don’t give a number. Perhaps I should send them back to the company with a note asking--why? why must you use plastic? Anyways, my almost-done-sweater is lovely. And I’ll get yarn locally next time.

~The usual milk bottle caps. Any ideas on something crafty I can do with my collection?

~A toothbrush wrapper. I got the kind of brush that you replace the head on. The replacement parts also come in a plastic package, but with four in a pack it seems like less waste overall. Maybe.

~Mac and cheese cheese pouch, and a ring from a jar of almond butter.

~Orange plastic strings from a few haybales. We need lot’s more of that.

~Styrofoam cup that we neither wanted nor asked for, but didn’t say no to quickly enough at a low blood sugar stop at the burrito shack drive through.

~A label from one of the several bouquets of daffodils we got for Cora’s birthday. And some veggie labels.

~A bottle of kid’s probiotics.

~Tub of sour cream left behind by our house-sitter after spring break. It was 3/4 full, and we were all in heaven. Cora ate it by the spoonful.

~A new printer cartridge, at last. We actually excavated an old printer from our shed in hopes that it would use less ink, and found a few cartridges in the box. So far we haven’t really had to deal with the ink question, but this is symbolic of an ongoing quest to get off the un-refillable cartridge habit.

~Plastic wrapping from a puzzle and CD Cora received for her birthday.

~Potato bag from our CSA.

Also this month I bought the following items, with full awareness of their plastic content but convinced that their usefulness justified it:

~A bottle of lye for soap making.

~A mesh plastic bag of onion sets. I had to have them, but felt so guilty I gave half to a friend, along with the offending bag.

~Also, we’ve been searching for plastic-free lamp oil, and were resigned to just using candles for our unplugged evenings. Then a friend gifted us with a quarter bottle of oil that he’d gotten just in case before Y2K, and we accepted it, gratefully. Or maybe I’m mis-representing that, because we actually begged him for it.

I think that the sheds of friends and neighbors should be fair game, though. The more we share and spread around tools and materials, the more we get to visit, and that makes the world a happier place to live in. And cuts down on new purchases of plastic. So if you need any lye, come on by. I’ll share, so long as you take the bottle with you. 😉